Five Moons Rising is out!!

That’s right, you can get it in your hot little hands. Right. Now! I’m excited (and a wee bit terrified), and I hope you are too.

This book was a long time coming for me. I first started writing it as part of NaNoWriMo. I knew I wanted to write something paranormal. Part of the fun of the paranormal universe is that there are so many different myths and legends to choose from and incorporate, and I was looking forward to doing that. I got to pick and choose what my beasties could do. For example, in this universe, werewolves are not negatively affected by silver. They don’t do much to discourage that assumption, though. Silver makes for crappy weapons, and they’re happy to keep would-be werewolf hunters at a disadvantage.

The other thing I wanted was to write something dark. There are certainly very dark moments in my On Deception’s Edge trilogy, but overall, I see it as a very hopeful story. This one was going to be different. I relished the chance to write about monsters of all stripes, including the human variety. As I wrote it, I came to realize that for my characters being a monster was about the choices they made, not whether or not they were human. I certainly wasn’t looking to make my supernatural creatures cuddly. (In this book, I use the term supranormal instead of supernatural. In terms of the story, it’s a term developed by the government that means those beings that are beyond or who transcend “normal.” After all, if supras are being kept under wraps, there can’t be people wandering around talking about the supernatural all the time.)

So I started writing. A lot. For those of you who aren’t aware, NaNoWriMo is short for National Novel Writing Month. (My wife likes to refer to is as FroYoPoMo, though I can never get a straight answer as to exactly what that’s supposed to stand for.) Sadly, my plans for NaNoWriMo were derailed by life, as so often happens. That November was the same month my relationship of fourteen years ended. I had far less than the 50,000 words one has to write to “win” NaNo, but the timing simply wasn’t there.

The following year, things had calmed down significantly, so when November rolled around again, I dusted off the Five Moons Rising manuscript. To my surprise, I really liked what I’d written so far. The first couple of days of NaNo were spent reading it over, which put me at a deficit to begin with. For me, NaNo works best if I write about 1700 words a day. When I start slacking is when I get into trouble, and here I was slacking by getting into my own story. Still, I prevailed and was able to complete NaNoWriMo that year. I wrote my 50,000 words and was most of the way done with my manuscript. Those of you who have read my other work, you’ve probably realized that I don’t do short well. There was definitely some writing that had to be done to complete the story, but that was going to have to wait.

When I wrote my debut novel, Depths of Blue, I had no other demands on my writing time. In fact, I wrote the first draft of the entire trilogy back to back to back. Five Moons was my first experience of having to juggle multiple novels at various points in the publishing pipeline. While I was trying to finish up my latest manuscript, I had to put it aside to work on edits for Heights of Green. By the time I got back to Five Moons, I simply wanted to finish the manuscript. As a result, the pacing felt strange to me, and I really wasn’t certain if I’d written a decent story or not. I put the manuscript aside for a few weeks before starting on revisions, which is pretty typical for my writing process.

After getting the manuscript polished to the point where I felt I had a decent final draft, I sent it off to my publisher and promptly got sucked into edits for Vortex of Crimson, then working on some short stories before starting a new project. (Actually, I started a few new projects, but the one that stuck was Demon in the Machine. Look for that one next year.)

So imagine my surprise when I got Five Moons back for edits and I found that I really liked the story. I’d gotten so sick of it, and the experience of writing it had been so disjointed compared to my first go-around, that I was half convinced it was terrible. It turns out it wasn’t! The big problem during edits is that I’d find myself reading the story instead of working on changes. The more time I spent with Malice and Ruri, the more I fell in love with them all over again. And as usual, my editor (the incomparable Medora MacDougall) had excellent suggestions. With her help, Five Moons Rising became a book I knew I could truly be proud of.

So here she is, finally. My fourth-born, of whom I’m inordinately proud. I hope you’ll come to love her as much as I do. 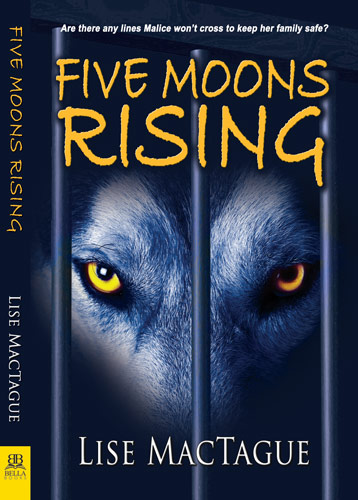 Unknown to regular citizens, nightmarish creatures lurk in the dark underbelly of human civilization. The presence of these supranormals (“supras”)—werewolves, vampires, demons—is a closely guarded government secret, as is the existence of a cadre of specially engineered Hunters charged with exterminating them.

Code-named Malice, Hunter Mary Alice Nolan was genetically modified and rigorously trained to use her great strength, heightened senses, and killer instincts to track and eliminate supras who prey on the innocent. A loner by choice, her only real link to the human world is her close connection to her mother and sister—until the unthinkable happens…
Ruri Samson has been a werewolf for more than a century and is comfortably situated as the Beta of her peaceful pack. Until she is betrayed by the woman she loves and an evil outsider massacres her Alpha and his most loyal followers. Barely escaping with her life, Ruri is forced to tread the perilous path of a lone wolf while vowing vengeance against the usurper and his minions.

Although these two powerful women should rightfully despise each other, fate will soon compel them to join forces on a dangerous quest to avenge their loved ones—and will ignite a forbidden passion that neither of them ever imagined.