Demon in the Machine, Meet the Characters: Isabella

Isabella Castel is the only daughter of the Viscount Sherard. While Briar revels in the structure of Victorian society, Isabella chafes against it. She was raised in high society, but her mother is not only American, but also highly unconventional in her own right. However, Althea Castel has learned how and when to disguise her differences while Isabella is still trying to get a handle on that.

When Isabella and her brother Wellington were children, their mother insisted tat Isabella was to have access to all the same schooling and tutors as her brother. Isabella discovered that she had an interest, and even better, a talent in building mechanical things. While her brother gravitated more toward the magical side of tinkering, Isabella gloried in the challenge of creating mechanical marvels using as little magic as possible. She developed a number of tools for around the shop, and designed and built what she calls a jump rig.

She was very careful not to let her father (Joseph, Viscount Sherard) know that she was using the jump rig to help her break into the houses of their peers. After Wellington drained the family resources and was sent to Germany ostensibly for school, but mainly to keep him out of trouble, she began supplementing the family’s resources with burglary. The shady past of Isabella’s mother past came in handy when Althea hatched the plan to keep the family from the poor house.

And so it is that Briar keeps running across Isabella at various high society functions and balls. Isabella plays the brainless socialite while keeping an eye on the expensive baubles of those around her. While Isabella is pretty good at playing her part, she yearns for more from her life than what she has. She and Briar do not hit it off, in fact, Isabella takes delight in tormenting Briar. Things begin to change when they’re forced to work together, and they realize they have more in common than either had thought. 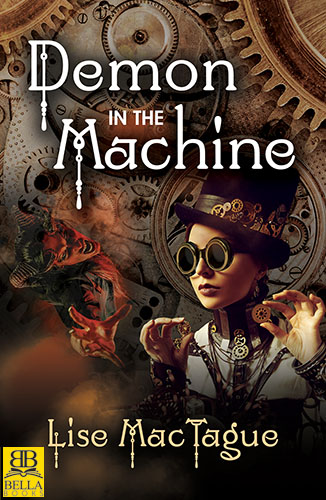 At the height of Britain’s Industrial Revolution, steam power and magic join forces to create wonders the world has never seen. But those wonders have a dark side—one that will soon force a reckoning few could have anticipated.

Half-demon Briar is content with her structured life as an archivist, a far cry from the chaos of her background and upbringing. Briar’s simple and predictable existence is rocked when she discovers something sinister powers one of the grand, new inventions of her era.

Isabella Castel, the only daughter of Viscount Sherard, is far from the brainless socialite she pretends to be. Isabella is everything Briar is not: passionate, creative and impulsive, but with secrets to rival even Briar’s own. Two more unlikely partners should not exist, yet if the women cannot find a way to work together, they will lose far more than their reputations.

Can a half-demon and a debutante work past their secrets before all hell breaks loose?