The deal with Smurfette

Posted on October 1, 2016 by lisemactague

I’m going to do something a little different today. I’m going to go on a bit of a rant. Why? Because it’s my page, I can, plus I can’t stand Smurfette!

“But Lise, surely there are better things to aim my rage at,” you say. That’s as may be, but the mind doesn’t choose what to be irked by, and beside that, I think it’s a worthwhile target for rage.

Did you know that this is the original Smurfette? (The one on the left, bestowing an obviously unwelcome smooch to a bemused generic Smurf.)

Surprised, aren’t you? You were probably imagining the blonde, pretty, fashionable Smurfette. If you look up her origin story, you’ll discover that she was originally created by Gargamel as a way to mess with the Smurfs. (I’m referring to her origin in the comics, since that’s how I was introduced to the Smurfs. We had no television when I was growing up, so I’m happily unaware of the Smurfs cartoon from Hanna-Barbera.) He basically created her out of clay as a version of the all-male Smurfs, but gave her long hair.

The idea was that she would so distract the Smurfs that Gargamel would be able to get up to whatever shenanigans he had planned for them. The only problem was, Smurfette was really annoying to them. She couldn’t cook, or sew, which was pretty much wasted no a village full of specialists in various areas. Beyond that, she wasn’t interesting to kiss, probably because she didn’t look feminine enough. All the Smurfs find her irritating and without redeeming value, so Papa Smurf takes her to his mushroom house, does himself some smurfy-type 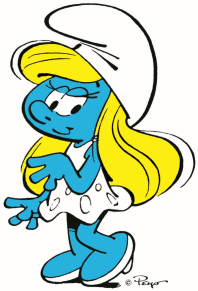 magic, and suddenly Smurfette is gorgeous. She has long blonde hair, and cute shoes and a pretty little dress. Add to that a cute button nose, and a coquettish act, and suddenly the Smurfs can’t control themselves around her.

She’s gorgeous and distracting, and everything Gargamel hoped she would be to them. They’re getting into fights over who gets to spend time with her and generally acting like idiots. But here’s what gets me… Nothing else has changed! She still can’t do anything. She still burns the cooking, but now the Smurfs think that’s cute. The only thing that’s different about her is now she looks feminine and girly.

What the hell? Even at the age of nine, I knew this was a steaming load of excrement. Way to bring it home to little boys and girls that the only value a woman can hope to have in the world is based upon her looks. Never mind that her only perceived value is that of a possession, an ornament upon the arm of some man, but that doesn’t matter as long as you look good. Not only that, little girl, you should want that! You should want some boy to twist himself into pretzels over your looks and get into fights with other boys. Not only should you be okay with this, but it’s something you should actively pursue. Sure, there are no other women for you to talk to in this village, only boy Smurfs being complete idiots, but that’s what you want!

And there’s my other problem. The Smurfs are all portrayed as male. Until the introduction of Smurfette, I viewed them as pretty much sexless blue beings. They had no gender, they didn’t need a gender, which also means they didn’t need Smurfette. That’s when I realized that male is viewed as the default setting, even though men are in the minority.

So nine-year-old me said screw that, and went outside to grub around in the dirt with my brothers and their friends.